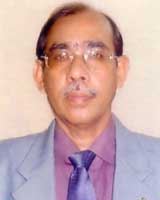 Engr. RABINDRA RANJAN SAHA, PEng , the son of late Brajendra Kumar Saha of Laksam, Comilla and at present have been residing at 370-371 Outer Circular Road Dhaka-1217.  He was born in a respectable Sanatan Religion family on the 31st December, 1953 and Bangladeshi by birth. He obtained his graduation in Civil Engineering in 1977 (March) from the Chittagong Engineering college (CUET). After then obtained Master of Science in Engineering (Hydraulics, Hydrology and Coastal Dynamics) from the university of Strathclyde  in UK. Just after graduation in Civil Engineering took employment in a private consulting Engineering firm named Prokaushali Sangsad ltd. in Dhaka as an Engineer Grade-II. This firm at that time was providing consultation in a Project for irrigation and drainage system of Pabna, shirajgonj and Rajshahi district under Rajshahi District Development Board-RDDB), financed by ADB owned by BWDB. Major works performed were supervision of survey works, design of irrigation and drainage channel, flood embankment, hydraulic structures such as regulators, sluice gate, remodeling of Bera regulator. Directly involved in preparation of drawings & layout plan, PP, financial and technical bid documents, office administration etc.

Joined on April 30, 1982 in Bangladesh Inland Water Transport Authority (BIWTA),a semi- government regulatory body under the ministry of shipping(MOS) as Assistant Engineer and since then have been working here to till Retirement date 29th December, 2011 as  Superintending Engineer Lot of project supervised and conducted while working there.

At present working in World University of Bangladesh since 11 August 2011 as Associate Professor.

During working in BIWTA he trained Sr, engineers of different government organization as well as private organization as trainer and specialist in dredging. Undertaken lot of trainings in country and abroad including UK. Joined in lot of conferences. Many articles presented in different institution and conference. About 9 articles published in different journals and national paper. A text book captioned “Introduction to Open Channel Hydraulics” is under publication by University Grant Commission (UGC) Bangladesh very soon. Member of technical and other members as well as fellow of different institution.