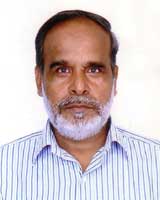 Prof. Md. Sekander Ali graduated in B.Sc in Civil Engg. from BUET in 1971. He had his M.Engg. degree in structural Engineering and Construction (SEC) from Asian Institute of Technology (AIT), Bangkok in 1983. He competed BCS Exam in 1973 and stood second in BCS (Public Works) cadre. He joined Public Works Department (PWD) as assistant Engineer in June 1974 and retired as Additional Chief Engineer in July, 2007. He was Project Director of many important Govt. Construction project. Among them; Mujib Nagar Memorial Monument, Supreme Court Annex Bhaban (Building), National Theatre and National Art gallery of Bangladesh Cultural Academy and Sheikh Naser Specialized Hospital, Khulna are worth mentioning. Prior to joining PWD, he worked as junior Structural design engineer in an Engineering Consulting Firm. On deputation from PWD, he was University Engineer at BUET, Director of Directorate of Urban Development (UDD) and Director of House Building Research Institute (HBRI). He was elected President of the Public Works Engineers Association for one term. He also attended several professional short courses during his service life in PWD. He also conducted several Professional training courses for the Junior Engineers. After retirement in July 2007, he has been working as faculty in the Department of Civil Engg, WUB. He served one term as Head of Department of Civil Engg, WUB. He has compiled and written the course materials for the course titled “Professional Practices and Communication” which is taught in the program of B. Sc. in Civil Engg. He is a fellow of the Institution of Engineers, Bangladesh (IEB).