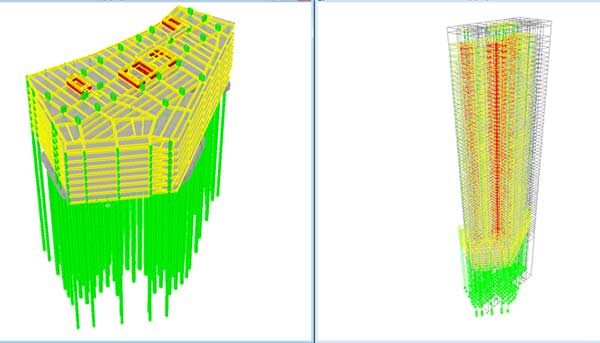 Flat slabs offer a type of dwelling with a simple and open living space, consisting of columns, multilayered earthquake-resistant walls and beamless slabs (floor panels). A Flat Slab floor is one consisting of a Reinforced Concrete floor slab built monolithically with the columns and supported directly by the columns without the aid of beams and girders. The slab is reinforced by steel in two directions so that it brings loads directly to supporting columns. Although it is also used with spandrel beams, more often the spandrel beams are omitted to leave a totally flat ceiling. Flat slabs can be supported by a column capital or a drop panel in order to provide a good resistance to punching shear around the column.

Unfortunately, the structural efficiency of the flat-slab construction mentioned earlier is hindered by its poor performance under earthquake loading. This undesirable behavior has originated from the insufficient lateral resistance due to the absence of deep beams or shear walls in the flat-slab system. This gives rise to excessive deformations and stresses (particularly the ‘punching shear’ stress due to transfer of shear from the floor to columns) that cause damage in non-structural members even when subjected to earthquakes of moderate intensity.

Q. Wouldn’t it be better if we don’t use flat slab in building?

A. Yes! It would be better but that’s not the solution an engineer should come up with. We need to solve the problem not by deleting it. Flat slab is aesthetically beautiful. Thus, to conserve the beauty it is require to built a new structural system that will provide us sufficient safety as well.